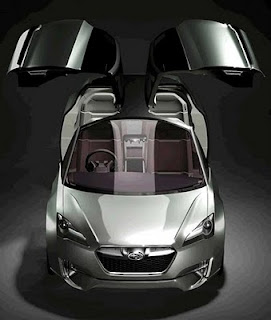 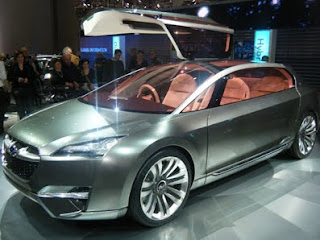 It’s been a few days since Derek and I returned from the 80th Geneva Motor Show which featured the world’s first ‘Boxer’-hybrid powerplant and Symmetrical All-Wheel Drive, Hybrid Tourer Concept car, making its European debut at the show. The show car marries Subaru’s design DNA with an opulent and spacious cabin accessed through elongated gullwing-style doors, and an eye-catching, sculpted body. It will be exciting day when our Middlesbrough dealership sees the arrival of this vehicle!

The absence of B-pillars affords a heightened sense of light and space to the interior, providing occupants with a less obstructed view of the outside world- all very clever stuff!  The swept-back panoramic windscreen and a height-adjustable dashboard afford the driver a similarly unhindered vantage point. I was definately impressed, the attached picture shows the Concept car in all its glory!

The innovative hybrid system uses Symmetrical All-Wheel Drive and a 2.0-litre horizontally-opposed, direct-injection, turbocharged petrol ‘Boxer’ engine, allied to two electric motors – Subaru remains the only company to mate this engine layout to a hybrid drivetrain. The electric motors are powered by lithium-ion batteries – a 10kW item at the front and a 20kW unit at the rear.

In normal driving conditions the direct-injection petrol engine is used, but at lower speeds and start-up, the rear electric motor drives the car. The forward electric unit, which is mainly used as a power generator, kicks in to assist performance and efficiency while tackling inclines. Subaru’s in-house designed Lineartronic automatic transmission is featured, further boosting fuel efficiency and driving performance. In short breathtaking performance with beautiful styling! I’m just looking forward to getting behind the wheel!

Thanks again for reading