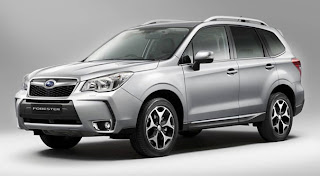 Heading out onto the A66, it’s a long drive from Derek Slack Motors to the Tochigi prefecture, 5,874 miles to be exact (and that doesn't include the side roads) but this is the setting for Subaru’s secret test development centre in Japan. Hidden from prying eyes, the facility sits inside a mountain which Fuji Heavy Industries (Subaru’s parent company), purchased over 20 years ago. They cut the top off and hid the facility inside. Contained within are numerous industrial buildings and an amazing array of roads with a steeply banked 2.5 mile high-sped oval rimming the dug-out mountain. This was the venue which greeted a select group of motoring press who drove several fourth-generation Subaru Foresters on and off road on the handling course, 40-degree slopes and the BIG oval.

The verdict?...Numerous changes define this new generation Forester beginning with a more muscular outer shell. Most noticeable are the new headlights, grille and hood with the largest change being the relocation of the external pillars. This offers a more streamlined profile and nearly 4-cm taller.
2.5 litre petrol and 2.0 litre turbo diesel boxer engines are unchanged other than the diesel’s maximum torque arriving 200-rpm earlier at 1600-rpm. There’s also the return of a 2.0 litre base petrol option - the first time since 2003, producing 110kW/198Nm. The range-topping XT model will also drop to 2.0 litres.
Mechanically, the biggest news is the addition of Subaru’s Lineartronic continuously variable transmission (CVT) as the auto choice, replacing the outdated four-speed (five-speed on S-EDITION) torque-converter unit used on previous models. Only the 2.5 litre and 2.0 turbocharged petrol XT models will be available with an automatic transmission. The 2.0 litre base petrol will be available with six-speed manual, and the 2.0 turbo-diesel continues with the six-speed.
Good news on fuel consumption (which is lower for all models), assisted by the introduction of stop/start function. The thirstiest 2.5 litre petrol engine now returns 8.1 l/100km, turbo-diesel models 5.9 l/100km, and new 2.0 litre petrol variants return 7.2 l/100km. These figures all compare well with Forester’s immediate competition. The 2.5 litre models sit comfortably ahead of all key automatic all-wheel drive petrol alternatives, aside from the CX-5’s 6.9 l/100km figure (but with a smaller 2.0 litre engine).
No need to visit Tochigi, as the new 2013 Subaru Forester will arrive in our Middlesbrough showroom sometime in the spring. We’ll keep you updated.