In just ten days, high-wheel world champion Josef Zimovčák cycles across the Czech Republic – in aid of children with cancer. What motivates such a man?
Crazy? Probably – but that’s the great thing about this charity adventure. Josef Zimovčák doesn’t seem to care that over 100 years ago,Penny-farthings were replaced by the comfortable bicycles we know today: He will be crossing the entire length of the Czech Republic on his giant high wheeler. In just ten days, he will be pedalling the 1,057 kilometres from east to west. A tour de force – but why? 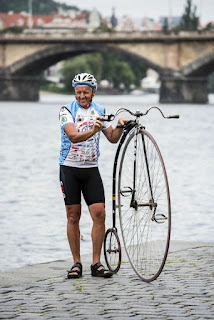 “We’re doing this for a great cause,” says the 12-times high-wheel world champion and mentor of the ‘Na kole dětem’ (‘Get cycling for kids’) foundation, which ŠKODA also supports. With each pedal stroke during the charity ride, he will be raising funds to enable children with cancer to go on rehabilitation and respite holidays. “Those who are lucky enough to be healthy must do what they can to help people less fortunate in life,” the 59-year-old explains his motivation.

Zimovčák is known for his ambition far beyond the high-wheel scene – he is also a respected professional cyclist. It is little wonder, as no other person has completed as many wild or gruelling tours on the huge two-wheeler: Zimovčák, born in 1958, has ridden several stages of the Tour de France, Giro d'Italia and La Vuelta. He has earned a place in the Guinness Book of Records riding the farthest on a Penny-farthing in 24 hours (522 kilometres in 1996). And yet: “For me, the greatest success in my life is the ‘Na kole dětem’ project. It has 3 levels: to help children get to know beauties of our country, to do some physical activity and to get involved in sport. I am a visionary; I believe that this concept will spread over the borders of Czech Republic and that the high bike has long future ahead.”

Zimovčák’s 2016 summer highlight was definitely his trip from Bruntál to Klasterec nad Ohri. Because the idea of a charity bike ride was so good, only prominent cyclists (on normal bikes) rode alongside him in the peloton, including three silver ŠKODAs: a challenge for all the riders in the convoy who could not match Zimovčák’s pace. The balance sheet: 40,000 euros were raised at the seventh charity ride of ‘Na kole dětem’. Calculated by taking the circumference of the high-wheel (4.78 meters) over a distance of 1,057 kilometres, that comes out at 18 cents per wheel revolution.

And what do you have to watch out for when mounting a high wheeler for the first time? It’s really quite different to normal cycling! From the very start: while one leg stands on the step attached to the frame, the other leg creates the momentum. Then, it’s a question of getting up to the saddle. The fun begins at the top: “Each pedal stroke drives the front wheel directly. You have to specifically counteract this impact force over the handlebars,” explains Josef Zimovčák. “Otherwise, you fly over the handlebars.” He has experienced this first hand: “I’ve had a broken nose twice, broken my hand six times, broken my jaw, I’ve lost eight teeth, broken my ribs three times and many other injuries that I have long-since forgotten,” says the consultant for life and accident insurance, smiling most with this response.

The 8th annual bicycle tour ‘Na kole dětem’ (‘Get cycling for kids’) starts on May 31st in Ústí nad Labem and finishes on June 10th in Rouchovany. Along its 1,205 kilometres, cyclists will pass through Prague, Mladá Boleslav, Vrchlabí, Česká Třebová, Zlín and Brno, over hills and valleys, along rivers and through forests. Simply put: it will sample all the beauty that is the Czech Republic. A number of stops with entertainment and educational programming are planned along the way, but the main part of the programme takes place behind the handlebars. So get ready to join us in pedalling for a good cause! 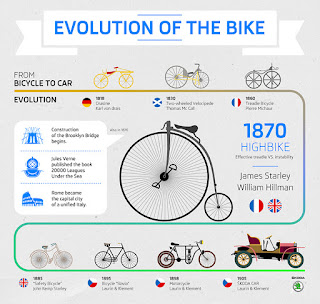