ŠKODA named as the UK’s most dependable car brand by JD Power- but we all knew that anyway!

The 1st September and one of the busiest days of the years at Derek Slack Motors. Just enough time to announce ŠKODA has been named as the UK’s most dependable brand in a new JD Power study. The inaugural 2015 UK Vehicle Dependability Study (VDS) asked owners to report problems with their new cars – from serious breakdowns to troublesome in-car entertainment issues. Once analysed, the results gave ŠKODA a clear victory, with the brand comprehensively outscoring luxury brands. 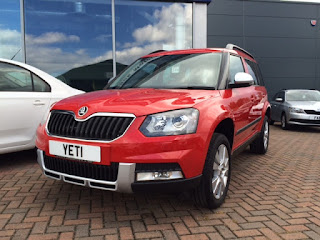 Every ŠKODA in the survey performed better than the industry average, with the Fabia ranked as the third most dependable car in the Small Car category.

Tony Slack, Managing Director and Retail Principal said: “This shows ŠKODA’s commitment for delivering quality and dependability. ŠKODA’s build quality is the envy of the industry, and it’s great news this has been recognised.
Following the JD Power report findings, UK Consumer organisation Which? has also named ŠKODA as a firm favourite with owners. The organisation’s 2015–2016 Car Guide named the Superb and the Yeti as the most satisfying cars to own in the estate and SUV classes, achieving owner satisfaction ratings of 96 per cent and 93 per cent respectively.