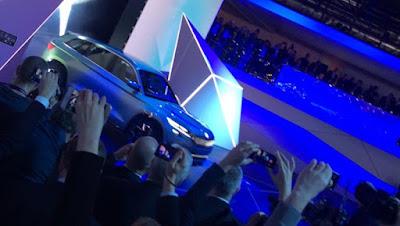 ŠKODA’s VisionS concept car has been unveiled at the Geneva motor show amid a flurry of flashbulbs, as photographers and journalists clamoured for a first glimpse of the car.

Members of the press in Geneva had already seen photos and illustrations of the VisionS, but this was their first chance to see it in the flesh. There was huge excitement on the SKODA stand during its unveiling and, if early comments are anything to go by, it’s sure to earn lots of fans among customers.

After unveiling the car, ŠKODA CEO Bernhard Maier said: “We already have a successful model in the compact SUV segment with the ŠKODA Yeti; now we are using our expertise in 4x4 technology to develop the new SUV model. This study also demonstrates our most important future technologies, such as the plug-in hybrid drive system; a similar drive system is also being tested for production cars.”

The VisionS is a six-seat concept version of the A+ SUV that ŠKODA is launching soon. The finished version is expected to have seven seats and is due to arrive at Derek Slack Motors in 2017.
Posted by Unknown at 07:26