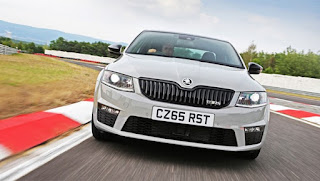 This year is the 15th anniversary of vRS in the  at Derek Slack Motors. Since the first Octavia vRS arrived in our showroom in 2001, ŠKODA has continually developed the vRS stable; drawing on its motorsport heritage to add more power and performance to its ‘Version Rally Sport’ range.

Octavia vRS Mk1 (2001-2006)
The Mk1 Octavia vRS was the first modern-era ŠKODA to enter the fiercely competitive performance car market. Showcasing ŠKODA’s optimism, confidence and engineering skills, the first Octavia vRS was powered by a 180PS, 1.8-litre turbocharged petrol engine and represented a number of ‘firsts’ for the brand. Not only was it the most powerful production ŠKODA ever built, it was also the fastest (146mph Hatch) and most expensive with a UK price tag of £15,535.
The first-generation Octavia vRS proved an instant hit with car buyers and the world’s motoring press. While it broke a price barrier for the brand, its high equipment levels meant that no rival could match the Octavia vRS for sheer value and entertainment.
Fabia vRS Mk1 (2003-2007)
ŠKODA ripped up the performance car rulebook once again in 2003 with the introduction of the Fabia vRS. Powered by a 130PS, 1.9-litre turbodiesel, the Fabia defied convention and proved that flexibility and a colossal torque output (310Nm) was more than a match for a peaky, high-revving petrol engine. It returned up to 53.3mpg and came loaded with standard equipment making it one of the most competitive and engaging packages in the sector.
Fabia vRS Mk2 (2010-2013)
After both first-generation vRS models proved huge hits with buyers, ŠKODA packed even more power, excitement and value into their replacements. The Mk2 Fabia vRS offered further innovation in the form of a twin-charged 180PS, 1.4-litre TSI engine and paddle-shift DSG transmission.
Octavia vRS Mk2 (2005-2013)
For the first time, the Octavia vRS was developed as a small range of its own, underlining ŠKODA’s commitment to the badge. Built on a brand new platform, it offered a smoother, more refined appearance. Powered by a new 2.0-litre TSI engine linked to a six-speed manual transmission, it became the first production ŠKODA to offer an output of 200PS.

To showcase the remarkable performance potential of the Octavia vRS, and celebrate the tenth anniversary of the vRS badge in the UK, ŠKODA UK made headlines around the world in 2011 when it attempted to break a land speed record at the famous Bonneville Salt Flats in the USA.
Built from a standard petrol-powered Octavia vRS by a team of ŠKODA UK engineers, the Bonneville special smashed the previous record for a 2.0-litre forced induction production car. At 7.45am on Friday 19 August, it registered an official record speed of 227.080mph – a record that still stands today.
Octavia vRS Mk3 (2014 – present)
The latest incarnation of vRS continues to push the boundaries, with a 230PS version released in 2015. Capable of 0-62mph in just 6.7 seconds, the vRS 230 is the fastest road-going Octavia ever built, with a 155mph top speed.