Episode 1 Does the yeti really exist? 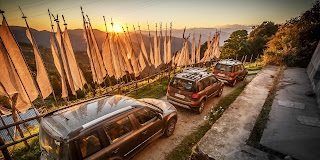 Does the yeti really exist? It’s a question that has engaged explorers for centuries – prompting countless expeditions into the wilds of Bhutan and spawning hundreds of unexplained sightings and stories. Enshrined in local folklore, the yeti continues to attract adventurers to the Himalayan mountains of Bhutan – all hoping for a glimpse of the mythical beast.

Such is the attraction of the area – which features some of the most challenging roads in the world – that ŠKODA launched an expedition of its own. Taking three specially prepared YETIs on an adventure into an area of Bhutan where many locals believe the yeti lives. Would the wild yeti be tempted out into the open by the appearance of three attract adventurers to the Himalayan mountains of Bhutan – all hoping for a glimpse of the mythical beast. Watch Thursday's episode for second part of the Yeti story.