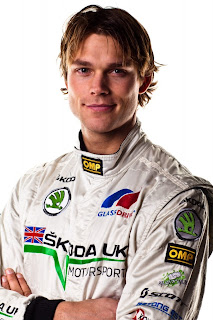 Andreas Mikkelsen picked up his second Intercontinental Rally Challenge drivers’ trophy in two years at an end of season awards ceremony in Paris – along with the additional award of the Colin McRae IRC Flat Out Trophy Driver of the Year.
Ola Fløene also in the famous luminous green ŠKODA tie collected his second successive co-drivers’ title, having guided Andreas to all his IRC successes.
Andreas began by saying, “I’ve just completed two fantastic years in the IRC with ŠKODA. It was a big opportunity coming with them in 2011 and I felt like I’d won the series when I got that drive. We’ve been very successful and won two championships. These years with ŠKODA UK have meant everything to me and if it wasn’t for them I’d still be driving in the Subaru Cup in Norway.”