Around the World Eighty Years Ago: ŠKODA RAPID‘s Trip Round the Globe 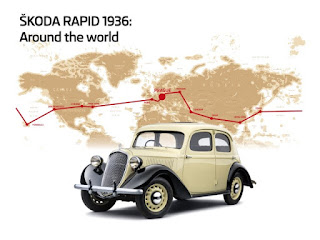 On 1 August 1936 at 11.55 Břetislav Jan Procházka and Jindřich Kubias returned in their ŠKODA RAPID from a trip round the world to Prague. The ŠKODA RAPID drove 27,700km across 15 countries and three continents in 44 days. In the 1930s spectacular long-distance trips put ŠKODA in the centre of attention, advertising the brand on global scale.
"The world tour undertaken by Břetislav Jan Procházka and Jindřich Kubias demanded a great deal of the men and the car," explains Andrea Frydlová, Head of the ŠKODA Museums. "The success of the trip highlights the high performance and build quality of ŠKODA vehicles even at that time. During their adventure the duo put their trust in a slightly adjusted ŠKODA RAPID with central tube frame equipped with a 1.4l and 23kW (31 HP) four-cylinder.   The car boasted independent wheel suspension and even hydraulic brakes. It proved to be the right choice also off the road, with most of the road network consisting of gravel tracks. New ŠKODA RAPID continues the success story With the new ŠKODA RAPID the Czech car manufacturer introduced the current generation of the production line in 2012. As the first model fully embodying the new ŠKODA brand design language, the saloon was followed by a hatchback, the ŠKODA RAPID SPACEBACK, in 2013. Both varieties have enjoyed popularity world-wide.