The Derek Slack Motors team are sending good luck messages to their friend, Aimee Willmott for the start of the 2016 Summer Olympics. Aimee from Middlesbrough is a competitive swimmer who has represented Great Britain at the Olympic Games, FINA world championships and European championships, and England in the Commonwealth Games. 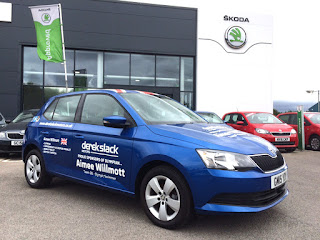 Aimee who competes in the individual medley has swimming in her blood: her dad Stuart also swam at the 1984 Los Angeles Olympics. Aimee, 23, now trains at the London Aquatics Centre where she competed in 2012 while her dad coaches in their home city of Middlesbrough. The whole family will be together in Rio cheering her on.

Tony Slack, Managing Director added, “As a keen outdoor swimmer, I’ve followed Aimee’s progress with a great deal of interest. She’s become an ambassador for Middlesbrough and we wish her every success in the Summer Olympics.”
Posted by Unknown at 06:41