The first engine made by Laurin & Klement (established in 1895) was a one-cylinder 1.25 HP unit designed for Slavia motorcycles. The brand founders introduced this engine in Prague-Bubeneč in November 1899. The beginnings were not easy, though, as the designers and engineers lacked one important thing – a magneto-electric ignition that only Robert Bosch in Stuttgart was able to produce at that time. Laurin and Klement approached him and he replied in person. By the way, this letter is still part of the National Museum of Technology’s collection, and careful readers will find twelve mistakes and typing errors


in its six lines. 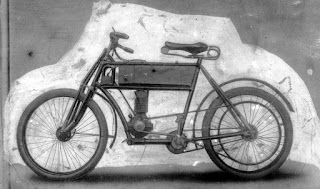 Bosch offered its device at 80 marks per unit, was not prepared to provide any discount and refused Laurin and Klement’s idea of testing the device in the Mladá Boleslav-made machine. Further letters apparently bothered him so he started replying without paying the postage, i.e. at Laurin and Klement’s cost. In the end the Boleslav engineers came to understand the whole principle and designed their own ignition system that was lighter, cheaper and more practical. “The result of presenting this vehicle of the future was indeed great”, Národní politika (newspaper) wrote on 21 November, 1899. The history of Mladá Boleslav-made engine was born.
Posted by Unknown at 02:35