KODIAQ SKINNED TO THE BONE 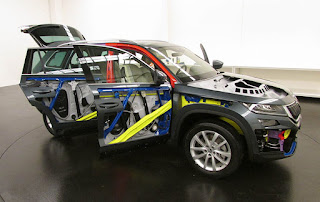 The KODIAQ anatomy can now be explored on a special vehicle that has been dismantled for ŠKODA.  “All of the key elements of the bodywork structure are visible – the deformation zones, the door reinforcements, the passenger compartment skeleton whose borders are formed by the A-pillar, B-pillar, doorsill and roof. Also uncovered are the locations of the respective airbags (including the pyro cartridges), the impact sensors along the vehicle’s perimeter, as well as the active safety elements – assistance systems, for example the front radar and camera, blind spot sensors and parking sensors,” explains Petr Kraus, Head of Vehicle Safety Development. “Further, the model offers spectacular views of the structure for all three rows of seats, including the seat AC system as well as the electrically controlled seat-positioning system that is fully functional. This makes it possible to check out the whole mechanism. Also completely functional is the window control system, which can be viewed – like in an aquarium –through big cut-outs as the windows slide down. The pop-out tow bar mechanism is exposed, too.”

Where can you see it? The KODIAQ cross-section model will appear in various TV programmes, at firefighter training sessions the purpose of which is to show the simplest ways of getting into the car if necessary, at safety education events for both adults and children.

Before doing so to the KODIAQ, “automotive surgeons” had also made cross sections from some of the other ŠKODA models currently available, including the RAPID, FABIA, OCTAVIA and SUPERB.
Posted by Unknown at 05:27