Isuzu has the farm factor in North Yorkshire 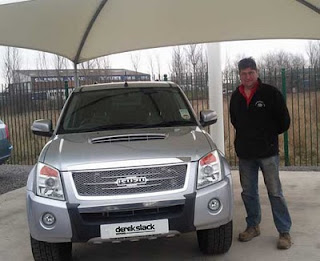 Many of our Isuzu customers will be interested to read that 10 UK Farmers were recently invited to go head-to-head in tasks that tested their practical skills on the farm as well as their knowledge of the industry.  Each week one of the competitors was sent home, with only one man left standing.  The prize was an Isuzu, which was featured throughout the series featured on TV.

The winner was not only delighted with winning the competition, but he’s also a big fan of his new Isuzu: “We now prefer driving the Rodeo to our traditional family car,” said Aled Rees - the lucky winner.  “It’s a fantastic vehicle that’s a real asset around the farm.  They gave us a demonstration of its off-roading ability during the filming of the series and we were all really impressed.”

Derek Slack Motors are all too familiar with the on - and - off road capabilities of the Rodeo. Many of our Isuzu customers also live in rural locations including North Yorkshire, the North York Moors, Whitby, Stokesley, Helmsley, Northallerton, plus, County Durham and Darlington. It’s not only rugged enough to deal with the rough-and-tumble nature of farming life, but it’s also proved to be the perfect solution for business users, including Mr. Russell of C. W. Russell Ltd of Middlesbrough who took delivery of his new Isuzu Denver Max LE from Derek Slack Motors on March 16th.