100 years of Isuzu and the new Venetian Red Blade 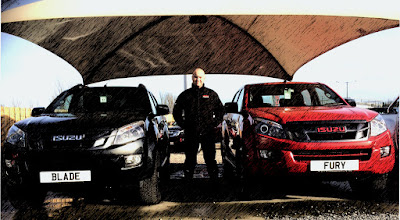 Derek Slack Motors, main dealers for Isuzu in Teesside and North Yorkshire are in the final stages of redeveloping their existing Isuzu dealership in Middlesbrough. This coincides nicely with Isuzu’s own journey, marking a century of manufacturing excellence, mould-breaking engineering innovation, and a century of commercial success.

Mark Hayter - Isuzu Pick-up Professional at the family run dealership in Middlesbrough began by saying, “Isuzu UK has an exciting year of activity planned to mark 100 years since laying down its foundations in Tokyo, Japan. A range of celebratory events and three special edition models will recognise the rich heritage of the company. The first to arrive in the UK being the Venetian Red Blade, (limited to 100 vehicles) and with orders already being taken.
Isuzu has created a rich heritage supported by those who not only design and manufacture the outstanding capability and durability of ISUZU vehicles, but also those like Derek Slack Motors - passionate professionals, providing sales service and support to the equally hard-working professionals who drive them.

Mark continued, “It’s also a double-header of celebrations, as 2016 marks 30 years since Isuzu vehicles arrived in the UK. Around the world, they talk in many languages, but speak in one tongue…Isuzu - the language of the Pick-up Professionals.”
You can follow the conversation online #ISUZU100
Posted by Unknown at 03:46