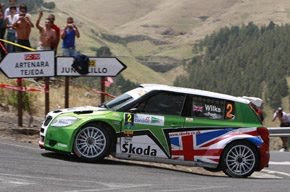 Guy was driving the same Škoda UK Motorsport Fabia S2000 in which he’d finished second on Rally Brazil and Rally Argentina. Having been shipped to Gran Canarias directly from South America, only a limited amount of time was available to change the car from gravel to asphalt specification – performed by the team’s skilled mechanics in the service bays of a Škoda retailer in Las Palmas.

On his first full asphalt rally in the Fabia S2000, the 29-year old Darlington driver set top-five stage times throughout the high-speed, two-day, 15-special stage event to stay second in the drivers’ standings.

It was also another fantastic event for Škoda, which scored its second consecutive one-two-three IRC finish. Having achieved its first international rally podium lock-out on Rally Argentina, the Czech brand did it again in Gran Canarias. This time, the three top Fabia S2000 drivers came home in a different order, with Jan Kopecký finishing 9.1 seconds ahead of Škoda Motorsport team-mate Juho Hänninen, and Guy a further 27.3 seconds behind. The result extends Škoda’s lead in the IRC manufacturers’ table to 31 points.

Third was just reward for a fantastic Škoda UK Motorsport effort, as the team had to overcome the disadvantage of not being able to test on the Spanish holiday island before the event began. The stages presented a great challenge, as the wide, twisty mountain roads were incredibly fast – with several tests completed at an average speed of around 60mph.

Car set-up was vital to give the Fabia S2000 the necessary high-speed grip levels required on the many long corners and to help preserve tyres. Although Guy experimented with different suspension settings throughout the event, he drove a faultless rally – pushing hard when the car was at its best on day two and driving intelligently when the mechanical grip was not so good in the middle section of day one.

Having completed day one in third place, Guy kept the pressure on Kopecký and Hänninen by pushing hard over the final day’s six stages. Guy made sure he was best-placed to benefit from any potential mishaps ahead, and despite a furious pace until the very end, the three Škoda drivers reached the finish in Las Palmas in the same 1-2-3 order they’d started the final day.

Guy said: “Three IRC podiums in a row for Škoda UK Motorsport and the second consecutive all-Škoda podium is a great achievement, and we are all very happy.

“It hasn’t been an easy event for us. We lost a chunk of time on day one trying things out on the car and we were a lot closer to the pace on day two. With Jan and Juho ahead, and only an all-Škoda podium to lose, there wasn’t a good enough reason to throw caution to the wind and really push on the final day, but we were happy to finish at the pace we did.

“It’s been a hectic start to the season, with this rally added to the schedule and the rally car coming straight here from South America. Preparation time has been limited, so we couldn’t test in Gran Canaria before the event. Sometimes you have to dig really deep, work hard and fight for every second – and this has been one of those rallies.

“We’ve got a little bit of a breather now before our next rally in Sardinia, so we aim to make the most of that time to prepare well for the next round of the IRC. I know that I and the Fabia can gel a little bit better and better results can come. I know we can push for the rally win, absolutely, and that’s what we’re aiming for.”

The next round of the IRC is the Rally d'Italia Sardegna (4-6 June).